No black for these gentlemen, they suited up in color at the GQ Awards. And while all three wore their suits well, Mr. Bose didn’t quite have our vote… His matching shoes were bit of a deal-breaker.

Round Up: Men’s Style

Here’s a round up of the Bollywood men at the recently conducted Filmfare Awards. Let’s break it down into three categories, shall we?

The Not Quite: Manish Malhotra, Karan Johar in Abu Jani Sandeep Khosla, Ayushmann Khurrana in Canali (With a different tie) & Arjun Kapoor in Shantanu Nikhil (minus the weird pose).

The “Whoa! What are they wearing?”: Ranveer Singh in a custom made Karrtik D suit, paying homage to the Bollywood movies of the 90s and Maniesh Paul in a NM Design Studio suit, which had a hypnotizing effect on my eyes.

Tell us, which look caught you eye, which one was a strict no-no in your book?

END_OF_DOCUMENT_TOKEN_TO_BE_REPLACED

Round Up: Men at Filmfare Glamour & Style Awards

Here’s a round up of some other bollywood men who attended the Filmfare Glamour & Style Awards. Saqib Saleem and Pratiek Babbar had an almost ditto moment in the same Karrtik D suit.

Sharad Kelkar’s Rad Bespoke suit was ill fitting and can we just say that we are glad that Jackie Shroff got rid of his bedazzled holster?

Whose look was your favorite? 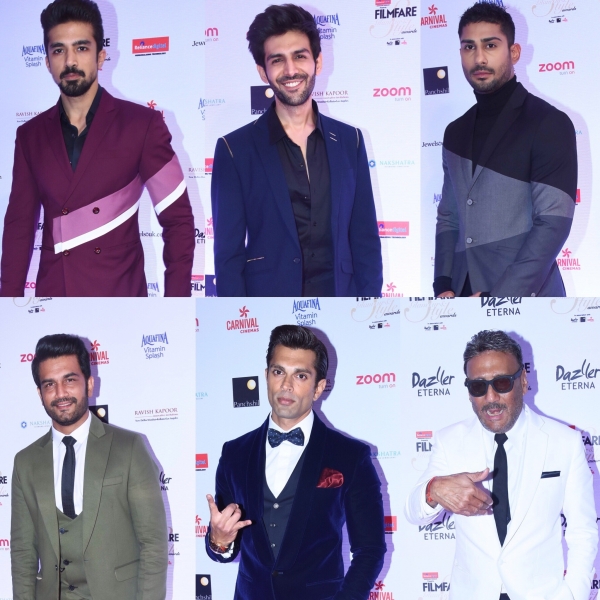